In July 1996 I did Paris - Amsterdam on a Flevobike recumbent.
When I stopped for a break in the village Albert I got some attention from the regional 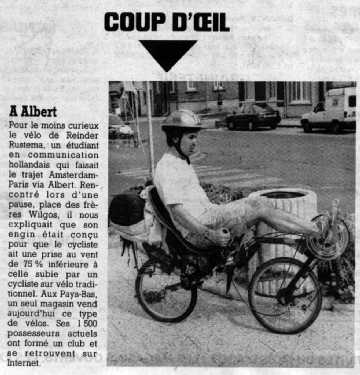 At least a curiosity the bicycle of Reinder Rustema, a Dutch student in communication who's making the route Amsterdam-Paris trough Albert. During a break, place des freres Wilgos, he explains us that his engine has been designed in order to take 75% percent less wind than what's taken by a bicyclist on an ordinary bike. In the Netherlands, currently only one shop sells this kind of bikes. The 1,500 owners to day have formed a club and meet on the Internet. Apparently my French isn't that good when it comes to numbers. I'm quite sure I said cinquante and not 75%. And cinq mille owners in the Netherlands alone and not just1500... And un seul "usine" and not a "magasin" for this particular model. Nevertheless, it's true that you can find quite a lot about recumbent bicycles on the net. Funny what the journalist picked up from my long story about it and put in the article. He didn't mention that it's more comfortable and a lot faster. At the time I didn't know the French word for it. "Vélo longé" and "Vélo fauteuil" have been suggested to me but apparently it's exactly the same as in Dutch: "Vélo couché", so I've read on the French recumbent page.

I'll never forget that trip by the way. Truckers and other motorists honking and waving, kids pointing and pulling their parents to look, old men in little villages applauding by the side of the road. Youngsters on terasses shouting. And most other pedestrians turning their heads, looking puzzled. The first thing I heard when I crossed the border from Belgium to France: "Heh mec! Il est super ce bicloune!" Bicloune is argot (streetlanguage) for bicycle I'm told. Also the name of the best bicycle shop in Paris (7, rue Froment), they might want to import a Flevobike for you in France. At least one employee tried to drive it.

I did the 500 km trip in 5 days. I know this is incredibly slow for a recumbent but that's because I was not alone. Going downhill without peddling is twice as fast on a recumbent for example. Switching bikes is not that easy because the Flevobike is a bit difficult to master at first. So I had to wait every other village to catch up with each other. Most of the heavy luggage was loaded on the mountainbike, I had the sleepingbags on the back and the 2 kilo iglo tent under my saddle. We didn't bring maps, no preparation whatsoever. A tiny little map in my organiser and a pocketsize compass guided us the way to the south.

A typical 'dashboardview' while bicycling through Belgium. One of the rare moments with Andrew driving in front. He is not particularly used to bicycling, it is tough to do in Toronto, and then suddenly driving 500km with a Dutch guy on this develish speed machine! Peddling through on an old 'secondhand' f25,- ATB: painful wrists, knees... 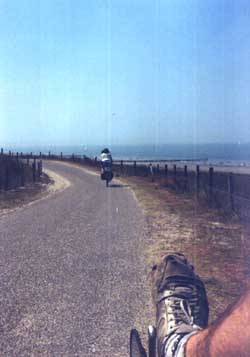